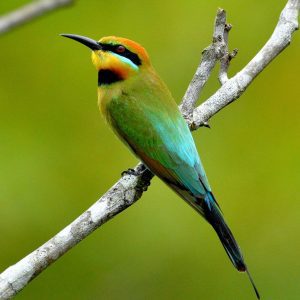 #CritterCorner: The Rainbow Bee-eater (Merops ornatus) are spectacular birds with a long slim curved bill and a long tail with distinctive tail-streamers. They are also spectacular hunters (did somebody say “Aerial Acrobats”?)!

These beauties eat insects, mainly catching bees and wasps, as well as dragonflies, beetles, butterflies, and moths, flying swiftly sometimes with rapid twists and turns, before snapping the insect in its bill. They catch flying insects on the wing and carry them back to a perch to beat them against it before swallowing them. Bees and wasps are rubbed against the perch to remove the stings and venom glands. So clever!

The Rainbow Bee-eater is widespread in Australia (except in desert areas). They are also found in eastern Indonesia, New Guinea and, rarely, the Solomon Islands. They are most often found in open forests, woodlands and shrublands, and cleared areas, usually near water.

These medium sized birds nest in nesting chambers (often lined with grass) at the end of a long, sandy tunnel, which the male and female bird select and dig. Both parents incubate the eggs and feed the young, sometimes with the assistance of helpers. 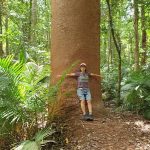 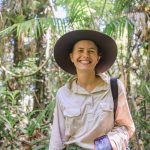