There are two subspecies of the Southern Cassowary. One lives on the southern half of West Papua and Papua New Guinea (Casuarius casuarius) and one in the tropical forests of Cape York and the Wet Tropics of Far North Queensland (Casuarius casuarius johnsonii)..

The Southern Cassowary is a direct descendent of the dinosaurs, it’s awesome and we’re lucky to have it here in Australia!

The Australian Southern Cassowary is listed as an Endangered species at both the Queensland State and Australian Government levels. Key threats have been identified as habitat loss, vehicle strikes, dog attacks and the increasing frequency of natural disasters. The Cassowary is regarded as a ‘keystone’ species. Through eating rainforest fruits and then pooing out the seeds some time later, they play a vital role in seed dispersal. Many plants depend on the cassowary for seed dispersal. Without them, the integrity of rainforest structure is in peril.

Cassowaries are shy by nature and only pose a threat to humans and domestic animals when defending their nests or chicks, if they have become accustomed to hand feeding, or when threatened.

We invite you to join us to help save this magnificent bird by getting to know the them, understanding their vital importance in nature and supporting the projects that protect and ensure their future.

The Australian Southern Cassowary is a large, colourful, flightless bird endemic to Queensland’s tropical rainforests. Cassowaries are ratites, an ancient group of flightless birds which also includes the emu, ostrich, kiwi and rhea.

WHERE DO CASSOWARIES LIVE? The Australian Southern Cassowary is endemic to Australia and found from Cape York to the Paluma Range in the Wet Tropics of Far North Queensland. They predominantly require tropical rainforest type habitats and feed on fleshy fruits, succulent new plant shoots, some fungi and occasionally, small marine life.

CASSOWARIES: RAINFOREST DINOSAURS – Modern birds are descended from dinosaurs and cassowaries belong to one of the more ancient lineages of living birds. The casque (the horn-like protrusion on their head) of the cassowary may serve a similar function to the helmet of the lambeosaurus (duck-billed dinosaur). Other similarities exist between cassowaries and theropod dinosaurs, such as their feet and respiratory structures. Their breeding behaviour is thought to have much in common with some groups of dinosaurs.

WHAT’S THAT ON YOUR HEAD? The horn-like structure on a cassowary’s head is called a casque. The inside is a honeycombed spongy structure which connects to the ear canals, while the outer layer is usually light to dark brown in colour and resembles the material found on a turtle shell. Because the casque’s shape and appearance can vary greatly individual cassowaries can often be identified by their unique casque.

While there is still much debate about the function served by the casque, La Trobe University researchers have revealed that the casque may be used to help the birds keep cool during Australia’s hot summers. Danielle Eastick, from the Department of Ecology, Environment and Evolution, measured 20 captive cassowaries across Australia and found that the birds released less heat from the casque in cold weather, and the greatest levels when temperatures hit 36 degrees. “Our results are quite compelling and it’s highly probable this is what the casque is actually used for,” Ms Eastick said. Read the full article here.

BRINGING UP BABY – Male-only parental care occurs in only about 1% of bird species, as opposed to female-only care which is found in about 8%. In approximately 80% of bird species, both parents care for their chicks. Male-only parental care is common amongst the ratites, with the exception of ostriches. Male parental care may also have occurred in theropod dinosaurs, the ancestors of modern birds. Southern Cassowaries are described as a ‘keystone species’. They are the only animal in the rainforest that eat the fruits from poisonous plants or plants with large seeds, and through their droppings disperse the seeds over a large range, allowing the rainforest to maintain species diversity and to regenerate if disturbed. 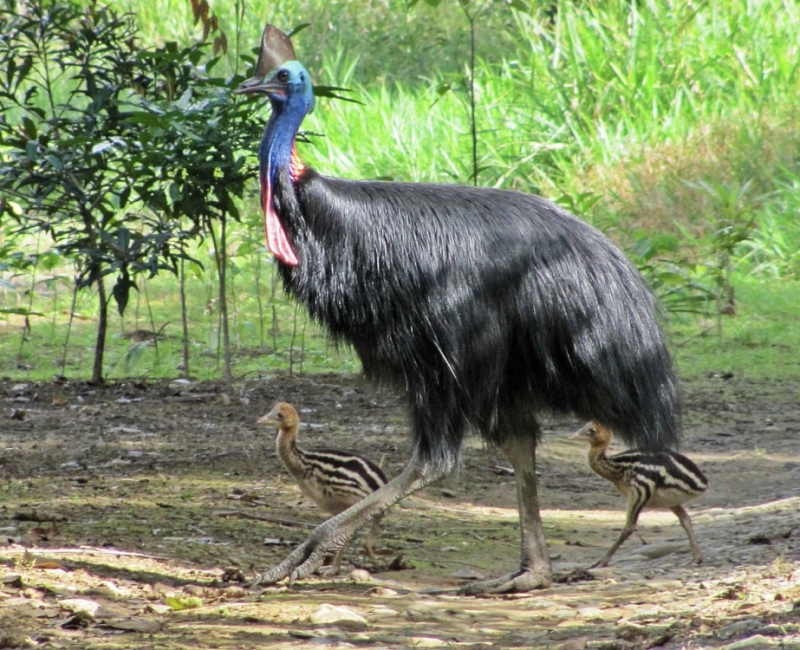 When you give generously, you become part of a committed team of individuals who collectively are helping to preserve some of the most biodiverse habitats and the species that live within them on this planet. Become a Rainforest Rescuers today!