The Wet Tropics stretch for 450km along the coast of Far North Queensland and cover 894,420 hectares. The dominant vegetation is tropical rainforest but tea tree, eucalypt and mangrove forests are also present. The tropical rainforests of this region are said to be the oldest continuously surviving rainforest on Earth, estimated to be more than 100 million years old.

Australia was once part of the southern super-continent known as ‘Gondwana’ including landmasses now known as Africa, South America, Antarctica and India. The break-up of Gondwana had a profound effect on global climates and the evolution of all subsequent life forms. 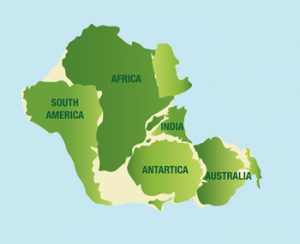 At the time of Australia’s European settlement, only about one per cent of Australia was still covered by this Gondwanan rainforest. Since then at least three-quarters of that rainforest has been cleared.

Australia’s unique marsupials first evolved in these rainforests, and their closest living relatives still live in the Wet Tropics. These rainforests represent one of the most comprehensive and diverse living records of the major stages in the evolution of land plants and contain the highest known concentrations of primitive and archaic rainforest flora.

During ice ages millions of years ago, global falls in sea levels led to a land bridge between the Australian mainland and New Guinea to the north, allowing land-based animals to move between the two landmasses. Evolutionary biologists believe this is how Cassowaries colonised New Guinea from Australia.

Australian rainforests are currently restricted to a series of discontinuous pockets extending for more than 6,000 km across northern Australia and along the east coast to Tasmania. The largest area of remaining rainforests in Australia is located in the Wet Tropics region of Queensland with relicts dating back to the days of Gondwana. The Wet Tropics of Queensland are of the most significant evolutionary diversity and survival of plants and animals.

There are more than 2,840 recorded species of vascular plants representing 1,164 genera; 75 of these endemic to Australia and 43 restricted to Queensland’s Wet Tropics. Endemic plant species found in this region include orchids, ferns, proteaceae and cycads. It is also rich in fauna species, most of which occur in the lowlands such as Boyd’s forest dragon (Gonocephaulus boydii), Victoria’s Riflebird (Ptiloris victoriae), Musky rat-kangaroo (Hypsiprymnodon moschatus) and of course, the Southern Cassowary (Casuarius casuarius johnsonii), one of the world’s few surviving giant flightless birds and megapodes (mound-builders).

How the Wet Tropics of Queensland World Heritage Area ranks

1. Outstanding examples representing the major stages of the earth’s evolutionary history.
2. Outstanding examples representing significant on-going ecological and biological processes in the evolution and development of terrestrial ecosystems and communities of plants.
3. Superlative natural phenomena or areas of exceptional natural beauty and aesthetic importance.
4. The most important and significant habitats for in-situ conservation of biological diversity, including those containing threatened species of plants and animals of outstanding universal value from the point of view of science and conservation.

Under the primary goal of the World Heritage Convention, the Authority must provide for the implementation of Australia’s international duty to protect, conserve, present, rehabilitate and transmit the Wet Tropics of Queensland World Heritage Area to future generations.

The Authority is responsible to both the Australian and Queensland governments through the Wet Tropics Ministerial Council and has an independent Board of Directors appointed by both governments. Administratively the Authority is a division within the Queensland Government’s Department of Environment and Science.