Your guide to understanding and protecting the world’s most ancient—and still evolving—rainforest.

Around 1,200 square kilometres in size and 180 million years old, the UNESCO world heritage listed Daintree Rainforest is one of the most valuable – and beautiful – natural World Heritage listings in the world. Whether you’re wanting to explore all this incredible area on a holiday to the Wet Tropics, or you’re looking to learn more about protecting the Daintree, you’ve come to the right place. Here’s our guide to understanding (and protecting) the magnificent Daintree Rainforest.

HISTORY OF THE DAINTREE

The Daintree is part of the broader World Heritage Listed Wet Tropics region of Queensland, Australia – situated within the Daintree National Park. The Wet Tropics were world heritage listed in 1988 (source), being recognised as one of the most universally valuable natural areas on Earth. Its significance is not limited to just Australians or the local community but the natural, scientific, and cultural benefits it provides for the entire world.

The Daintree is also significant for its location – situated between Mossman Gorge and Bloomfield River, while also bordering on the incredible white sandy beaches that lead onto the Great Barrier Reef.

During the 40 million years after Australia separated from Gondwana (one half of the supercontinent Pangea), the continent was made up of mostly rainforest. Nothing like the 20 percent of arid desert that occupies Australia now (source). The Australian climate gradually became drier until only small regions of Australia’s land was made up of rainforest. The Daintree represents an incredibly unique area of the continent that offers a vital insight into Australia’s rich history of flora and fauna.

All of our unique marsupials and almost all of our mammals originated from rainforests with the Daintree providing the closest living relatives of these animals (source) . The Daintree and broader wet tropics region provides vital scientific information for interpreting fossils of flora and fauna in Australia, along with understanding evolution in general.

FIRST NATIONS PEOPLE AND THE DAINTREE

The traditional owners of the northern Queensland rainforest area are the Kuku Yalanji People – with the Daintree Coast (and within that the Daintree Rainforest) being just one part of Eastern Kuku Yalanji country.

Often referred to as the Rainforest People, the Kuku Yalanji people have lived in the area for more than 50,000 years.

The Daintree Rainforest – and the area more broadly – is both culturally and spiritually significant to the traditional owners, with many places of spiritual significance:

THE DAINTREE IN THE MODERN ERA

The Daintree was colonised in 1873 after George Elphinstone Dalrymple discovered it and named it after his friend, geologist and photographer Richard Daintree. This resulted in a significant interruption to the way of life of the Kuku Yalanji people.

Since then, parts of the Daintree rainforest have been subjected to development that has threatened the welfare of this unique natural environment. Ten years prior to the World Heritage listing in 1988, significant sections of the coastal lowlands and hill faces were subdivided for residential development by a Cairns property developer.

Despite many of the 1,100 blocks not being built on, this event left behind a legacy that has allowed these properties to be continually developed – in the heart of the Daintree lowlands surrounded by the National Park and World Heritage Area. (source)

One key part of why the Daintree is so unique and special is that it contains a number of Australia’s unique animal species: 30 percent of frog, reptile and marsupials, 90 percent of our bat and butterfly species, and 18 percent of bird species. All of this within just 0.2 percent of Australia’s total landmass.

The Daintree is both incredibly unique in its concentration of animals and plants, as well as extremely diverse. The Daintree region boasts many ancient plants with the majority of the world’s 19 primitive plant families to be found in the Daintree National Park.

ANIMALS OF THE DAINTREE

The Daintree is home to a number of animals that are found nowhere else in the world such as the Southern Cassowary, the Daintree River ringtail possum, the musky rat-kangaroo.

The Southern Cassowary is a fascinating, large flightless bird that stands around 2 metres tall. Southern Cassowaries are vital to protecting the rainforest – they are the only animal in the Daintree that is able to eat the biggest rainforest fruits and then spread the seeds across large distances (source).

Cassowary numbers have been reduced to as little as 2,000 (source) and are in danger of extinction from continued clearing of the rainforest, dog attacks and speeding motorists. Read more about our efforts to Save the Cassowary.

The Musky Rat Kangaroo is another incredible and unique animal of the Daintree – the most unchanged member of the kangaroo family having remained relatively unchanged for millions of years.

PLANTS OF THE DAINTREE

Animals aren’t the only thing the Daintree has in spades. According to the Wet Tropics Management Authority, The Daintree is like a ‘living museum’ of how lowland plants have evolved since Australia separated from Gondwana.

An example is the truly unique Idiospermum australiense (aka the Idiot Fruit) – known as Australia’s most important botanical discovery. The Idiot Fruit was re-discovered in 1972 and is a truly unique find, giving scientists insight into how flowering plants evolve.

If we’ve learnt anything about the Daintree, it’s that it is a vitally important and wonderful part of Australia’s, and the world’s, history. This is why we’re committed to protecting the Daintree Rainforest – it’s our duty to the planet and to the unique and important species that exist here. Read on to learn more about how Rainforest Rescue’s initiatives are helping to protect the Daintree from increasing clearing and development. 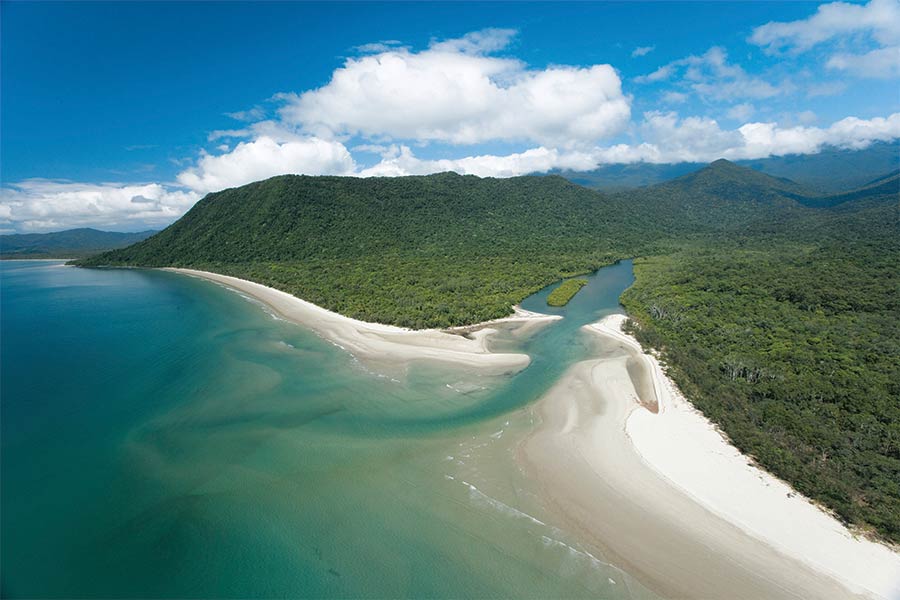 Our ‘Save a Rainforest’ initiative purchases privately owned blocks in the Daintree lowlands that were excluded from the World Heritage listing. This important work helps protect rare and endangered species like the Cassowary and Spectacled Flying-fox – along with the Daintree’s ancient flowering plants. 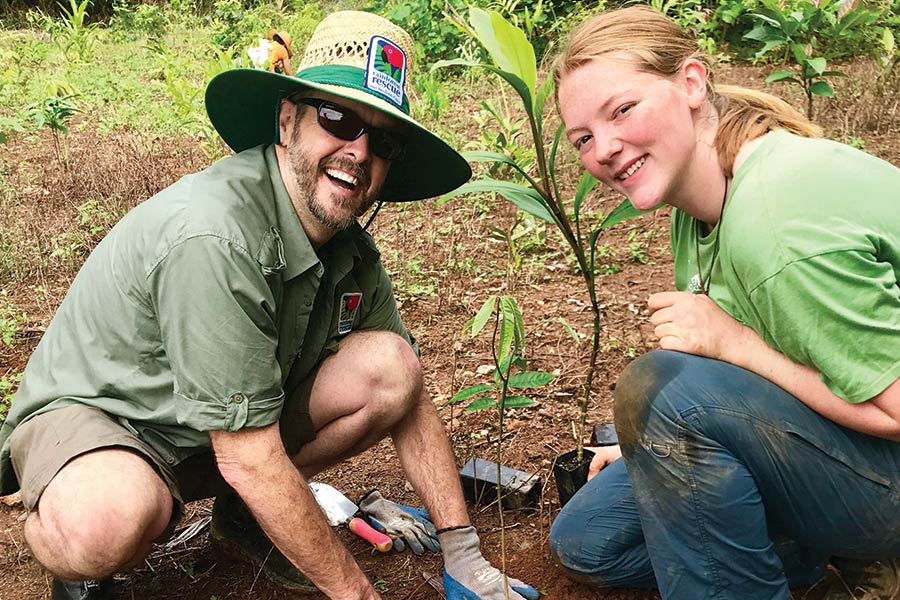 Over three-quarters of Australia’s rainforests have been cleared since European settlement. ‘Plant a rainforest’ is our restoration initiative, where we plant trees on previously cleared areas of rainforest. This helps establish habitat for the plants and animals endemic to that specific ecosystem and protects the incredibly important wildlife of the Daintree. 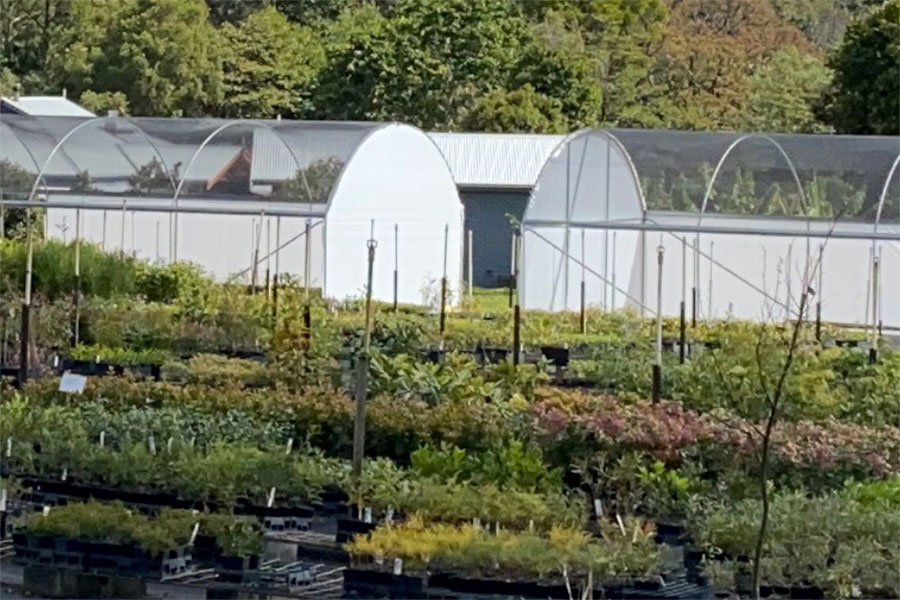 The Daintree plant nursery is where we plant and propagate rainforest trees that will be planted in our Plant a Rainforest project. We collect seeds from the Daintree Lowland Rainforest and then replant them back into the area from our plant nursery. The nursery produces an average of 12,000 plants a year with the help of our incredible volunteers.

Click the link below to learn more about our Daintree Rainforest Plant Nursery.

HOW CAN YOU HELP

There are so many ways you can help protect, preserve, and grow the incredible Daintree Rainforest. Whether you want to donate or volunteer, Rainforest Rescue has a number of projects that you can take part in. Read how to get involved, or head to the donate link to help us in our work.

STAY IN THE LOOP

Head over to Rainforest Rescue’s News page for the latest updates on our work preserving a vast biodiversity of plants and wildlife in our rainforests. Make sure you’re subscribed to our quarterly eNews to receive updates direct to your inbox!