History of Development in the Daintree

Visitors to the Daintree Rainforest are often surprised to find that areas of the Daintree Lowland Rainforest have been cleared for rural housing development and farming. 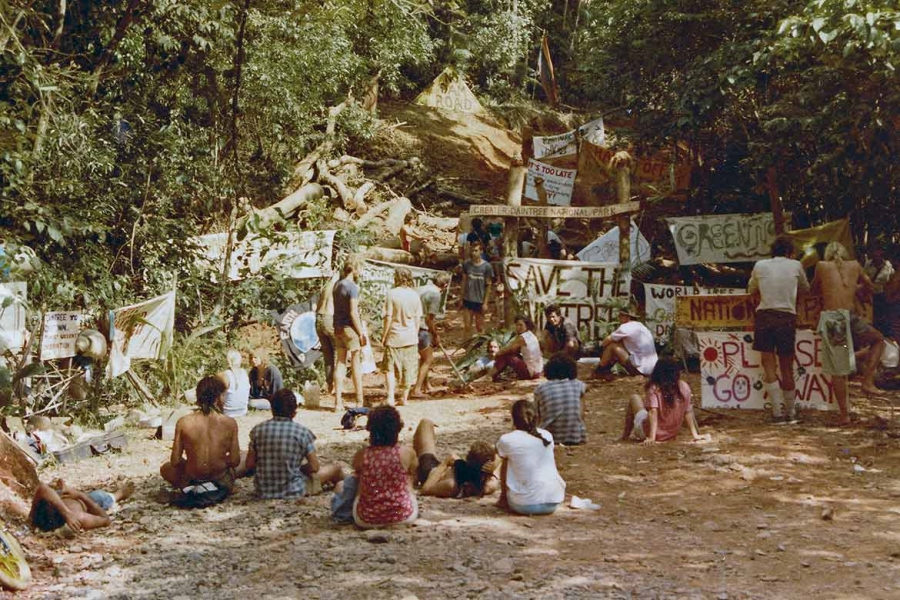 In 1983 the Douglas-Shire Council pushed ahead with a controversial plan to construct a permanent road from Cairns to Cooktown which was supported by the Bjelke-Peterson State Liberal Government. The publicity generated by the 1983-84 community blockade provided a turning point in the campaign to protect Queensland’s tropical rainforests.

While the World Heritage Area included the majority of the upland areas of the Daintree Rainforest, it excluded most of the hill faces and coastal lowlands. Ten years prior to the World Heritage listing, large sections of the lowland rainforest were subdivided for residential development by a Cairns property developer.

Originally there were 1,100 subdivided blocks of land. Many were not built on because there is no bridge over the Daintree River (access is by ferry) and no mains electricity. However, developers have left a legacy of freehold properties in the heart of the Daintree Lowlands surrounded by the National Park and the World Heritage Area and these properties are now being steadily developed.

Various attempts by governments have failed to solve the problems created by the residential subdivision. In 1984 the Federal and State Governments funded the $23 million Daintree Rescue Program to be implemented over four years. This was successful in purchasing a number of significant blocks of land for inclusion in the Daintree National Park, as well as developing eco-tourism infrastructure. However large amounts of critical conservation land was still not protected.

Prior to the 2004 election, the Federal Government committed $5 million to the Daintree; however, this was largely diverted to landholder education rather than the much-needed buy back.

In June 2004 the Douglas Shire Council implemented a 12-month moratorium on approval for development in the Daintree while it prepared a Douglas Shire Draft Planning Scheme for the area. Fortunately, the Queensland State Government (again immediately prior to the 2005 State Election) also committed $5 million and following the adoption of the Scheme in 2006 committed another $5 million.

The Douglas Shire Council Planning Scheme protects 350 properties north of the Alexander Range, which have been acquired with Queensland Government funds. The Scheme also created “Rainforest Residential and Rainforest Tourism Precincts” where development is allowed and will be concentrated. Properties with building permits obtained before the adoption of the Scheme also retained these rights. Therefore development can still proceed north of the Alexandra Range including at Cow Bay, Diwan, and Cape Tribulation. Land south of the Alexander Range remains unprotected by the Scheme and development proceeds unchecked.
Rainforest Rescue works to purchase and protect those properties containing intact high-conservation value rainforest which still maintain their development rights. Our vision is to purchase all remaining rainforest properties by the year 2040.

Both the State and Federal Governments have indicated that they have no intention of funding further buy back schemes in the Daintree.

When you give generously, you become part of a committed team of individuals who collectively are helping to preserve some of the most biodiverse habitats and the species that live within them on this planet. Become a Rainforest Guardian today!