Aboriginal people sustainably managed the rainforest for thousands of years, and the cassowary was appreciated as a food resource and for its seed dispersal role because it meant an ongoing supply of new fruit from new trees. The cassowary is culturally significant to the traditional owners of the tropical rainforests. It is integral to their culture, customs and values, appearing in important traditional stories, ceremonies and dances. Involvement of traditional owners in environmental management allows the incorporation of traditional ecological knowledge and ensures the maintenance and continuation of cultural and spiritual practices and education.

Daniel Beeron – Girramay “The story of how Gunduy came to be was told by my father’s late father and when I heard his recording it sent shivers through my body. Hearing an audio voice recording of a man I had never met was overwhelming and then to realise the connections from way back then to nowadays are still strong and keep us connected to the land, spiritually. The rainforest is home to us because it just is! And the Gunduy is the one of the many unique links”.

Whitney Rassip – Djiru “Growing up I was told that Gunduy (Cassowary) is very important to us rainforest people, my father, and grandfather’s family. But I didn’t experience that feeling until I started learning my country, now I realise, the connection and role of Gunduy in the rainforest. Every time I see a Gunduy I know that my culture is still alive, which is why I try to do as much as I can to ensure its survival, now and into the future.”

Jean Thaiday – Girramay/Jirrbal “Cassowaries are beautiful, but can be a dangerous bird. Flora and Fauna were a part of our lives while growing up in the bush. Some were totems for families and we only use parts of plants for shelter, medicine, food, ceremonies, hunting and as a calendar. After Cyclone Yasi damaged plants and animals, some are slowly regenerating. My second year working as a nursery assistant, gathering seasonal flowers and seeds and cassowary droppings has helped us see what fruits cassowary eat, we then plant in tray, pot and plant-out on revegetation sites throughout the Girringun Country. There are trees with leaves that looks like cassowary foot (jina-gundulu), fire-wheel (oak) and flame-tree. It’s a rewarding job for anyone.”

Bryan Tobane – Girramay Dancer “I am a young Girramay dancer, we do a dance called “Gunduy” which describes how the cassowary moves and acts in the scrub. I like the gunduy dance as the cassowary is an important animal to us, which we need to protect.”

Abe Muriata – Girramay “At age 11-12 year old I began accompanying adults on hunting trips which usually lasted all weekends. From such an early age I began learning about the animals and their environment from elders and kin with knowledge that was passed down from generations. In the early 1960’s wildlife corridors from seashore to mountain foothills were very much in tact in the Kennedy Murray and Tully valleys. My early childhood was spent in the Murray/Tully, from mountains, foothills, to seashore, hunting fishing camping with Girramay, Jirrbal and Gulnay people. The abundance of wildlife meant it was not uncommon to be sharing a feast of cassowary at Murray-upper in the morning, only to be sharing another feast of cassowary in the evening on the Tully river. My real lesson into my teenage years was going into the cassowary’s own environment, to see, hear, smell and understand where he lives. To see what he sees, to hear what he hears, to smell what he smells and imitate how he moves effortlessly through even the thickest tangled rainforest and hardly make a sound. To know his feeding pattern, where he drinks, where he rests or even identify a site to lay eggs. Knowing what was fruiting, how many tracks and how old the tracks are I know how many are living well in a certain area.”

In this video, Girramay Elder, Uncle Claude Beeron tells the story of “Goondoye” and how he came to be transformed from a man into the solitary bird of the rainforest …

The Gunduy/Gundulu (Cassowary) is a large flightless bird that roams North Queensland’s tropical rainforests. Cassowaries are primarily frugivores (fruit eaters), the unique bird with a long blue neck, a red wattle hanging from its neck, and a brown casque (helmet). The Cassowary is now listed as ‘endangered’ under the EPBC Act. This large flightless bird was an important traditional food source to our rainforest people. Still to this day the Gunduy holds great significance to rainforest Aboriginal peoples.

Our people, the Rainforest Aboriginal people of Far North Queensland have lived with cassowaries for thousands of years or since Dreamtime.  These birds are an important part of our culture, stories, songs, dances and identity. Our rainforest aboriginal culture is interconnected with the Gunduy and our country. They are a part of us and are a very important animal for our rainforests and our culture.

In 2005 it was estimated there were 43 adult cassowaries left in the Mission Beach area (C4, 2005). The number of adult cassowaries in the Mission Beach area to date is unknown. We hold grave concerns for the Gunduy and its survival. Our rainforest culture would not be the same without the cassowary, their survival is critical to the ongoing continuation of our unique rainforest culture. We hold great hope that we can work together with the wider community to help our Gunduy survive and prosper for our future generations of Aboriginal Rainforest people and our traditional country.

Threats to the Cassowary in the Girringun Region

GAC involvement with the Cassowary

GAC involvement with Rainforest Rescue and ‘Save The Cassowary’ campaign

Increase awareness and education of the cultural and environmental importance of the cassowary. Educate and raise awareness to the general public of this magnificent species and its significance both culturally and environmentally within North Queensland’s tropical rainforests.

The Southern Cassowary has a number of names in the different languages of the traditional owners of the tropical rainforests as seen in the table below (Source: WTMA). 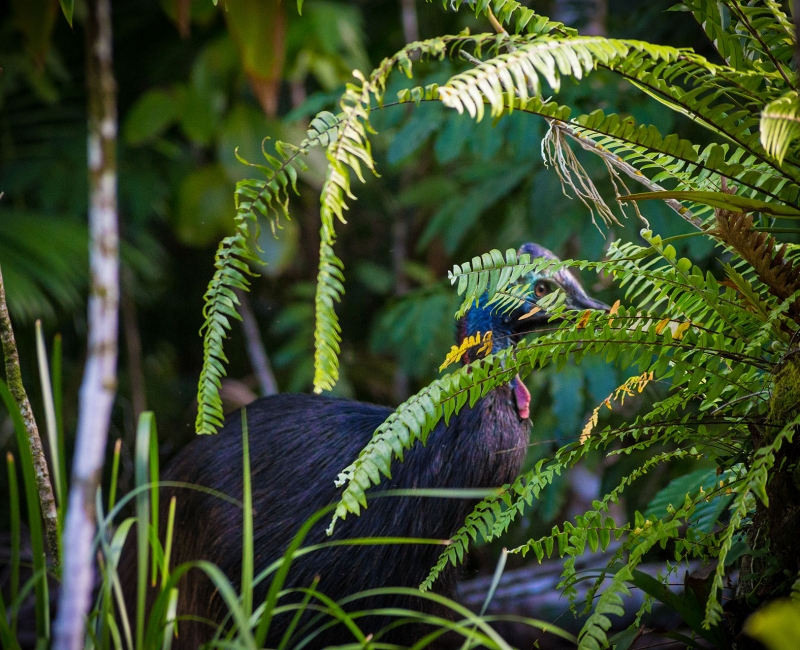 Sign up and we’ll keep you posted with the latest news on Rainforest Rescue’s work preserving a vast biodiversity of plants and wildlife in our rainforests.