Current Threats to the Cassowary

Many threats endanger the Southern Cassowary, mostly due to increasing human presence in its habitat. The main causes of cassowary deaths are habitat loss, vehicle strikes, dog attacks and disease

Although not a main cause, hand-feeding alters the cassowaries’ natural behaviour and disorients them, rendering them dependent on humans. Feral pigs also directly and indirectly threaten cassowaries, although the extent of this is not well researched.

The Southern Cassowaries of Cape York have not been extensively studied. Much more research is required to determine population numbers and specific threats, however as land clearing has been less extensive there, habitat is largely intact and the impact of threats related to habitat loss is believed to be lower.

Cassowaries occur throughout the Wet Tropics where suitable habitat occurs, with the exception of the Windsor Tablelands. The following threats have been identified, particularly for the Wet Tropics populations of Southern Cassowaries. 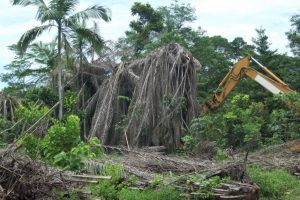 Loss of rainforest habitat is the primary threat to the cassowaries of the Wet Tropics. Rainforest vegetation has been extensively cleared, particularly in lowland areas. By 1997, 81% of native vegetation had been cleared, and remaining rainforest habitat was substantially fragmented. While the rate of clearing in the Wet Tropics has slowed considerably since 1997, land clearing for housing development still continues and threatens local populations of cassowaries already subsisting in degraded or fragmented habitat outside of protected areas. An increase in human population associated with housing development brings more cars and dogs to a locality, increasing the risk to cassowaries.

Habitat fragmentation due to clearing disrupts cassowary movement patterns and can separate parts of an individual bird’s territory, such as the habitat associated with feeding and breeding activities. Habitat fragmentation can also separate birds from each other, resulting in genetic isolation and local extinctions. 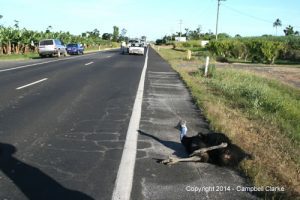 Roads are a major cause of direct cassowary mortality due to vehicle strikes.

Roads can also fragment and degrade cassowary habitat; impose barriers on cassowary movement patterns; and hasten the spread of invasive species. The location of roads also affects different cassowary populations disproportionately, with cassowaries in more developed areas impacted at a higher rate. Vehicle strikes are the leading mortality cause in the Mission Beach area.

According to data from The Queensland Department of Environment and Heritage Protection Threatened Species Unit and Garners Beach Cassowary Rehabilitation Centre, There were 104 deaths from vehicle strikes between 1992 and January 2014. 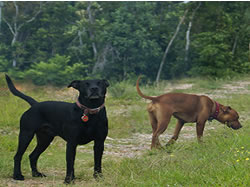 Dogs and cats are predatory animals that attack and kill protected native species and, when unrestrained, one of the biggest threats to our wildlife.

Attacks on cassowaries by feral and free-ranging domestic dogs are a major cause of mortality and injury, especially around developed areas such as Mission Beach.

Southern Cassowaries are also threatened by diseases, such as avian tuberculosis, which is caused by the bacterium mycobacterium avium. It can affect wild and domestic birds around the world and is spread by ingestion or inhalation of the bacterium, which can survive in the environment for many years. It causes chronic wasting in infected birds and there is no known treatment.

Cyclones are the main natural threat to habitat and food loss. Not only are cassowaries in danger from falling trees and rising waters during storms – they must travel further to find food, increasing their exposure to risks such as road crossings. 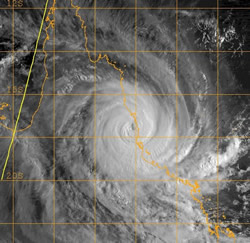 Severe cyclones are a natural part of living in the Wet Tropics and they can have a huge impact, not just on local residents and infrastructure, but on the rainforests and wildlife. Recent cyclones in the Wet Tropics include Cyclone Larry (2006) and Cyclone Yasi (2011).

Severe Tropical Cyclone Larry crossed the tropical North Queensland coast near Innisfail during the morning of 20 March 2006 and is regarded as the most powerful cyclone to affect Queensland in almost a century. Fortunately, no lives were lost and no serious injuries were reported. However, between Babinda and Tully, damage to infrastructure and crops was extensive with the total estimated loss upwards of half a billion dollars. To a somewhat lesser extent, damage also occurred in areas north to Cairns, south to Cardwell and on the Atherton Tablelands. Then Premier of Queensland, Peter Beattie declared Larry a disaster situation, comparing it to Cyclone Tracy, giving local governments the authority to enforce mandatory evacuations.

In the wake of Cyclone Larry, one-third of the cassowary population died as a result of the impact of the cyclone, loss of their natural food sources, dog attacks and vehicle strikes as they left the fragmented and destroyed habitat in search of food.

Severe Tropical Cyclone Yasi was a very powerful and destructive tropical cyclone that made landfall in northern Queensland, Australia on 3 February, 2011. Cyclone Yasi made landfall in Mission Beach with wind gusts estimated to have reached 290km/h, leaving behind significant damage. A storm surge estimated to have reached 7m (23ft) destroyed several structures along the coast and pushed up to 300 m inland.  Most of the beach had lost its sand and every structure was damaged to some degree. The worst affected areas were around Tully, Tully Heads, Silkwood, Mission Beach, Innisfail and Cardwell.

In the wake of Cyclone Yasi, Rainforest Rescue came to the rescue to help fund the supplementary feeding of cassowaries.

Under climate modelling based on a high emissions scenario, average temperatures in the Wet Tropics are predicted to increase by up to 1.4°C by 2030 and 4.2°C by 2070. Changes to other climatic patterns, such as El Niño / La Niña cycles, are expected to lead to changes in rainfall patterns, including a more intense wet season and longer, drier dry periods. 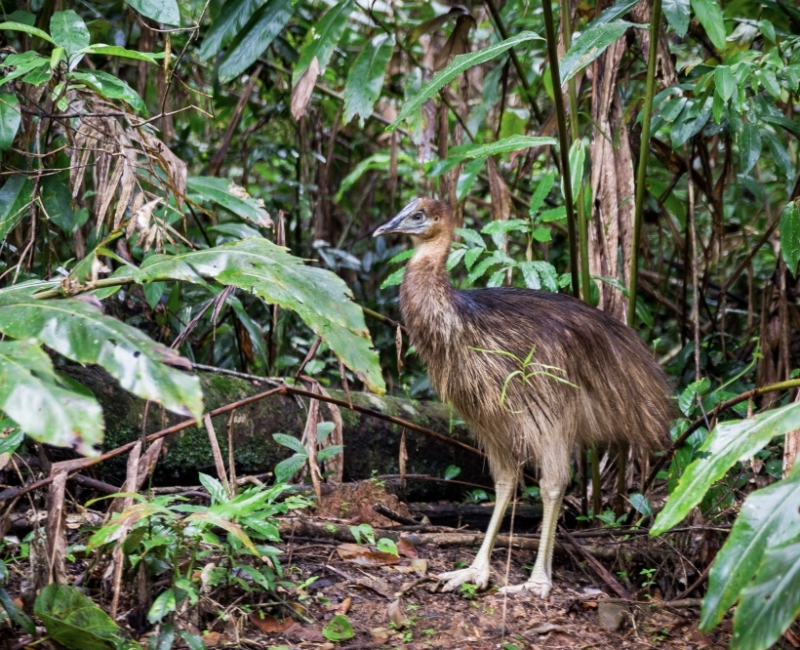