Working Together in Sumatra

Rainforest Rescue’s Orangutan Habitat for Survival Project is working in partnership with the Orangutan Information Centre in North Sumatra to save endangered animals, by restoring and protecting critical habitat in the Gunung Leuser National Park.

We are replanting rainforest species; removing illegally planted oil palms; and preventing further clearing of rainforest by providing alternative and sustainable employment through rainforest restoration to the local community.

So far this financial year, Rainforest Rescue has contributed $20,000 to the project.

In collaboration with students from Cranbrook School in Sydney (who fundraised), we distributed five camera traps and GPS equipment in the Gunung Leuser National Park (Northern Sumatra).

We distributed 20 camera traps and GPS equipment to the Alliance of Integrated Forest Conservation (ALeRT) for use in the Bambangan Reforestation Area in Way Kambas National Park (Southern Sumatra).

Orangutans and Eurasian wild pigs have been captured on camera.

17 species have been captured on camera including: 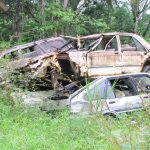