Weapons in the War on Weeds – Weed Management 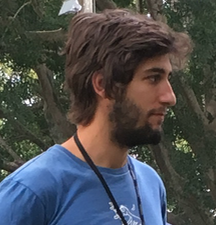 As part of his research, the controversial issue of the use of Roundup was raised; Dan spoke further about the issue…

In July 2016, glyphosate – the active ingredient in Roundup (the world’s most widely used chemical herbicide) – was within hours of recall from shops due to a ruling by the European Commission. Only at the last minute and under threat of a lawsuit from the manufacturer Monsanto was it given a temporary reprieve and an extension to continue production. By the end of 2017, a report from the European Chemical Agency determined whether glyphosate was safe and whether its production and use were allowed to continue in Europe – click here to read their findings. In 2015, a report by the World Health Organization’s International Agency for Research on Cancer identified high doses of the herbicide as a “probable carcinogen” sparking fierce debate on its use in agricultural systems. There is also controversy over glyphosate’s impacts on the wider environment with the chemical being implicated in the decline of earthworms (1), soil microbial communities, butterflies (2), and amphibians (3).

Environmental weeds are a serious contributor to animal and plant extinctions worldwide (4). They can influence nutrient cycles and fire regimes, can outcompete native flora, and cause landscape and evolutionary scale changes. Effective management and control of weeds is crucial to maintain the health of rainforests and protect their unique biodiversity. The current research project at Rainforest Rescue is evaluating weed control methods to ensure compliance with international best-practice. An important element is learning from, and sharing knowledge with, other organisations working with similar issues. Rainforest Rescue has a clear responsibility to ensure that control methods are underpinned with the best scientific information and minimise harm to the environment and native flora and fauna.

Over the past 45 years, glyphosate use has been growing, not only in food production but also in conservation actions including ecological restoration projects (5). Due to limited funding and resources, conservation and restoration organisations often can’t employ enough people to manually remove weeds at the scale required. Even if money and time weren’t an issue, manual weed removal can be ineffective and sometimes counterproductive (5). As such, the cost and time-effective nature of using glyphosate can be appealing (5). There are many different methods by which glyphosate can be applied to weed species depending on the characteristics of the plants. Some methods include precision application and have little reported impact on the surrounding environment. However, more significant impacts can arise when broad-scale spraying is used as this can result in excess glyphosate entering the soil or reaching non-target species.

Glyphosate-containing herbicides are often advertised as becoming inactive in the soil very quickly due to their ability to bind to soil particles. However, the breakdown of the active chemical (N-(phosphonomethyl)glycine) can be delayed as this process is dependent on the presence of specific soil bacteria (6). Other additives present in the solution aside from the active ingredient (known as surfactants) can also cause unintended harm to non-target species and the wider ecosystem (7). The problem can be further exacerbated when the volumes of herbicide applied are not regulated, as is often the case with backpack sprayers. In a significant number of cases more glyphosate than is needed is applied, which subsequently can drip off the leaves of the target species and soak into the soil (8). In addition, when glyphosate breaks down its primary metabolite is also toxic to plants (9).

Weed management is a complex issue, and the methods for controlling and suppressing weeds need to reflect that. Glyphosate has become a problem due to many people considering it as a one-size-fits-all approach to controlling weeds. As a result of its over-use, glyphosate residues are now found in a startling proportion of the produce we eat and drink and its impact on natural systems can be significant. Weeds can also evolve to become tolerant of glyphosate, so land managers need to ensure that they have alternatives available. In general, a shift to a more integrated weed control system with a variety of control methods is needed, both in farming and in habitat restoration. No one method is appropriate for controlling weeds everywhere, and Rainforest Rescue is looking to lead by example by proving that habitat restoration doesn’t need to be dependent on glyphosate.

The initial desktop and stakeholder research has shown that Rainforest Rescue’s weed control methods are in accordance with other environmental groups working in similar areas. They are diverse and adaptive, depending on the situation and what kind of control is required. It is Rainforest Rescue policy to err on the side of caution – while the jury is still out on the health and environmental impacts of chemical herbicides like glyphosate, we will actively pursue alternative weed control methods that do not use them.

To further this agenda Rainforest Rescue is looking into the efficacy of a whole host of non-herbicide-based methods, as well as methods that reduce the number of herbicides used to control weeds. Depending on the circumstances at a site, alternative practices that have been used or considered include residue mulching to suppress weed germination, the use of living mulches, and supporting soil microbial communities which favour native woody species. Using naturally competitive native plants to displace weeds is Rainforest Rescue’s favoured approach.

An important factor in that approach is the density of tree planting used by Rainforest Rescue. By planting trees at a high density the tree canopy closes quickly, shading the ground and making it unsuitable for light-dependent weeds. In the Daintree, the rate of tree growth in reforestation projects means that weed management is only an issue in the first couple of years. Rainforest Rescue plants a significant range of species in reforestation projects, and these are supplied from local seeds propagated at the Daintree Native Nursery. This approach not only helps to restore plant diversity and improve weed management but also includes the growing of species that are a food source to attract birds, mammals, and other wildlife back to the areas. The wildlife then disperses seeds back into the plantings, further increasing the number of trees. 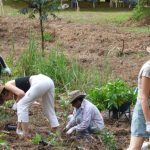 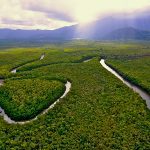