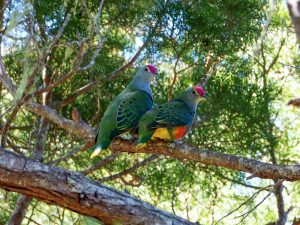 You can find these feathered beauties in northern and eastern Australia, and in Indonesia, generally in coastal tall tropical and sub-tropical forests, particularly with dense vine growth and many fruiting trees.

The Rose-Crowned Fruit-Dove is listed as ‘Least concern (LC) – Decreasing’ on the IUCN Red List of Threatened Species.

Rose-Crowned Fruit-Doves feed high up in the canopy of the rainforest, mainly in the morning or late afternoon, often they are only detected by their calls or the sound of fruit dropping to the ground.  They feed entirely on fruit from vines, shrubs, trees, and palms, and they are thought to be locally nomadic as they follow the ripening of fruits. Despite their size, they swallow fruit whole and its believed that figs are their favourite treat!

When it comes to mating, the courting behaviour of the Rose-Crowned Fruit-Dove is the typical bowing display of pigeons, tucking in the head and showing off their pretty pink cap. Their nests are frail, loosely woven cups of twigs and tendrils. Both birds incubate, but predators often take the single egg. Their breeding season is from October to January.

Aside from predators snatching their single egg, threats in Australia include rainforest clearing and fragmentation, logging, weeds and increased fire regimes altering habitat, as well as the removal of Camphor Laurel, an introduced tree that has become an important food source, without appropriate alternatives.

Fun Facts: Rose-Crowned Fruit-Doves also use Camphor Laurel as a food source, and take water from leaves or from dew (not from the ground). 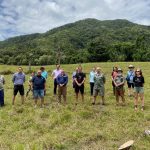 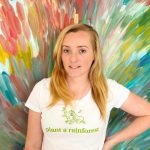