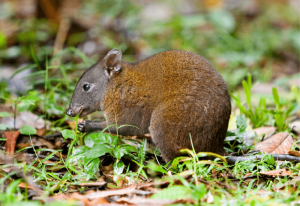 Did you know that the Musky Rat-Kangaroo (Hypsiprymnodon moschatus) is the smallest kangaroo in existence, weighing in at only 620g? And it’s a true blue kangaroo!  If you are quietly walking through Tropical North Queensland Rainforest in the early morning or evening, especially if you’re on one of our rescued properties, keep your eyes on the forest floor, as this is where you will most likely spot these special critters. These tiny kangas are endemic to Rainforests in Northern Australia, meaning they are native and restricted to the tropical Rainforest, occurring from sea level to 1200m.

They used to have four similar-looking, related species wandering Miocene Rainforests, but now these are the only survivors. They have survived in Australian forests for over 20 million years and have managed to retain the ancient characteristics of their extinct ancestors, such as opposable thumbs on their hind feet used for climbing, their prehensile tails used to grasp or hold objects, unspecialised teeth, digestive tracts, diet and their habit of birthing twins or triplets. Modern kangaroos have lost all these traits, though the bettongs and potoroos— relatives of the musky rat-kangaroo, have also retained their prehensile tails.

Their favourite foods are rainforest fruits, particularly fungi fruit such as the small white or grey mushrooms that sprout from rotting logs, and invertebrates. They are known to hide individual fruits and seeds in various locations to ensure a good supply and sometimes can be hoarders, hiding more than they need. They protect their food hauls from competitors by burying them in the soil, covering them with leaves and twigs so that the location remains known only to them – this protects the seeds from being eaten and killed by other animals and improves the chance of seed germination – some species rely on them as this is the only way they can reach germination. Talk about specialisation! This is one of the reasons that this species is so important, like the Cassowary and Spectacled Flying-Fox, as they are Rainforest Gardeners!

Thanks to our friends at Australian Geographic for the information. 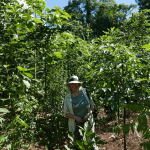 It’s all about ‘from the ground up’…Flora, Learn, Rescue, Staff 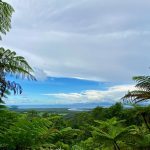