The Amethystine Python (Morelia amethistina), also known as the Scrub Python, is the largest native snake in Australia & PNG. 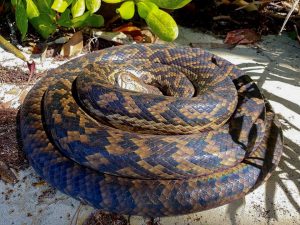 When measured by length or weight, they are ranked #6 on the list of largest snakes in the world. A typical adult Amethystine Python will measure around 2 to 4 m. Females generally weigh around 15 kg, while males are much smaller weighing in at an average of 5.1 kg. Some exceptional specimens have been confirmed to weigh over 30 kg!

The Amethystine Python can be found in Indonesia, Papua New Guinea and Australia. They prefer warm, humid habitats with good water sources and Queensland’s population resides primarily in the rainforest.

Some larger Australian and Papuan specimens catch and eat wallabies, and cuscus, waiting by creek and river banks for prey seeking drinking water, but the general diet of the amethystine python consists of birds, bats, rats, possums, and other small mammals.

The Amethystine Python is listed as ‘Least concern (LC) – Stable’ on the IUCN Red List of Threatened Species.

Wondering where the name Amethystine Python comes from? Look closely, and in the right light, and you’ll see this beautiful critter shines like an amethyst gemstone.

Fun Fact: These beautiful snakes have infra-red or heat-sensitive labial pits that allow them to detect, stalk and strike prey accurately in the dark.

If you’d like a visual of just how big these snakes are compared to a full-grown human, check out this Facebook post from our friends at Destination Daintree 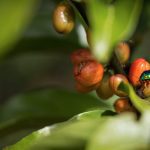 Insights and Sounds of the ForestLearn, News, Staff, Tree Planting 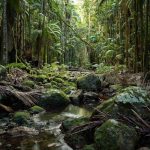