After the fires – Nightcap National Park 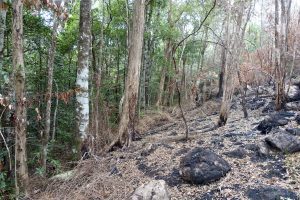 While the Daintree wasn’t affected by the fires, many other significant Australian forests were. The wildfires that swept through Australia in 2019 and 2020 burnt over 10 million hectares of the landscape. Over 1 billion animals have lost their lives, including many threatened species that have been significantly impacted, creating an immediate need for well-informed action.

Several months later, COVID-19 closed state borders, and many are wondering what the landscape looks like now and what’s ahead. The Guardian takes you on a virtual journey through the blackened path of Australia’s summer of bushfires, including meeting up with Rainforest Rescue’s Scientific Advisor, Dr Robert Kooyman, to talk about the effects the fires had on Nightcap National Park in the Gondwanan forests – an area that Dr Robert has a deep connection to and has been working in for many years.

About a quarter of Kooyman’s beloved Nightcap national park, in the world-heritage listed Gondwana rainforests of northern New South Wales, was razed in November 2019. 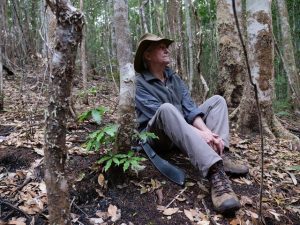 “It’s a deeply emotional and visceral thing,” says Kooyman. “You can’t spend four decades in a place and know individual trees and then not be moved. There have been a lot of moments like that.”

A week or so after the fires had burned out in February, with trunks still smouldering, Kooyman headed straight for that misty spot in the park where he stands today.

Pink ribbons and stakes mark out observation plots where Kooyman is recording the forest’s every move – from changes in the leaf litter to every new shoot or dying tree.

He’s seeing some trees sprouting and seedlings emerging. But he is also seeing more trees dying. 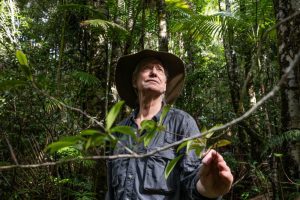 “Tree death can be slow,” he says. “Once the base is burned and it’s gone through the bark, in the weeks and months after you’ll see a decline in the health of the canopy. I’m still seeing mortalities six months after the fires.

There are 40 reserves that make up the world heritage-listed Gondwana rainforest area. More than half burned in the latest fires.

Read the full article, ‘Australia after the bushfires’ here, an article by Graham Readfearn, published by The Guardian on Wednesday 29 July 2020.

Big Scrub Past and Present Map 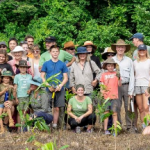 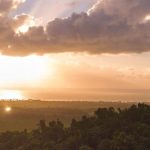