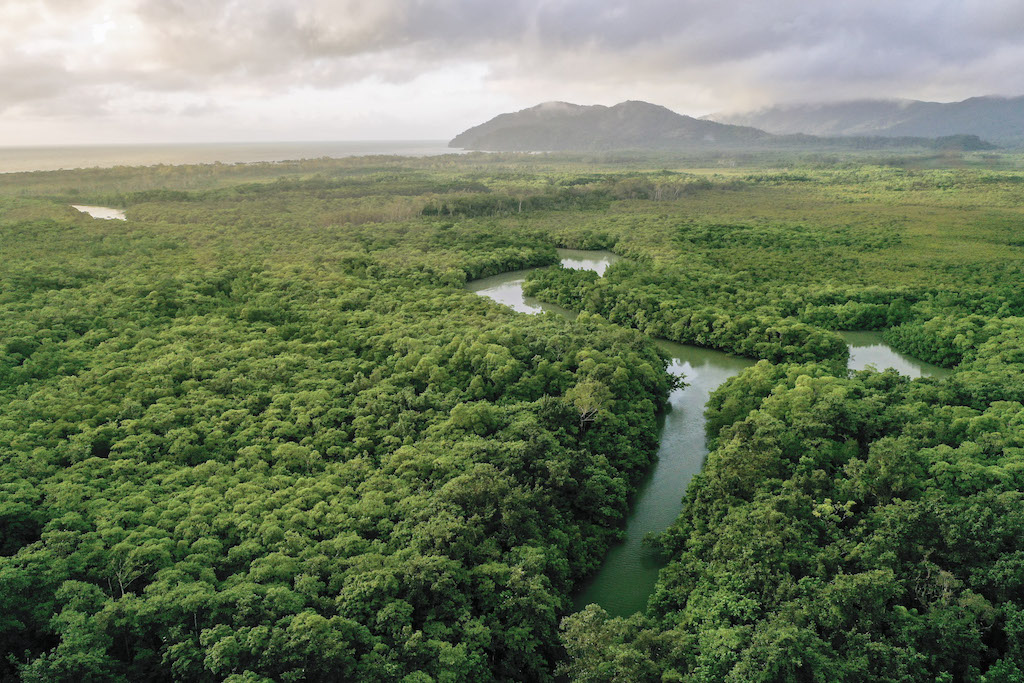 Cooper Creek meanders through the midst of a 180 million-year-old rainforest.
Credit Martin Stringer

Queensland’s rainforests have long been cleared to give way to logging and sugarcane fields. But now the comeback of the world’s oldest rainforest has begun.
Words JOHAN AUGUSTIN

The mist from a recent shower still lingers in the air. Rain in this part of northeastern Queensland is a frequent event, which not only makes the undergrowth – consisting of big ferns and hundreds of other plant species – constantly soaked, the humid air creates a water vapour that literally brings out all the aromas in the rainforest.

We are in the Daintree, and not just in old-growth forest, but, at 180 million years old, in the oldest existing rainforest in the world. It’s also Australia’s biggest rainforest, covering 1,200km², and it hosts 3,000 plant species and varied fauna. Hundreds of threatened animal species – such as tree kangaroos and cassowaries – live here, as do roughly two-thirds of the country’s bat and butterfly species, and over a third of Australia’s frogs and marsupials.

But the forest that remains is just a fragment of what once was. Cattle grazing, sugarcane fields and other developments have severely damaged or destroyed large swaths of the ancient forest. Recently, though, a breeze of change is starting to blow through the area. Environmental organisations have begun collaborating with the landowners to restore these forests. And some organisations, like not-for-profit Rainforest Rescue, are conducting buy-back schemes of once-cleared land so that forests can be completely regenerated; Rainforest Rescue alone has bought roughly forty lots of private land. 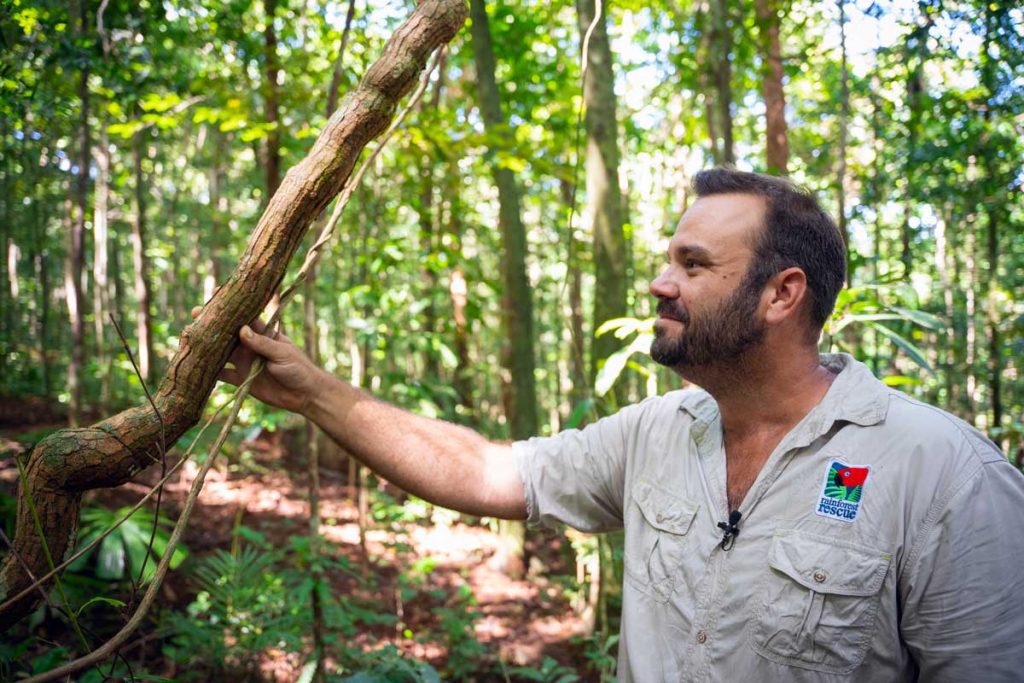 But even when the farming stops, old-growth forest doesn’t just reappear overnight.

“We use some pioneer species to create substance,” says Justin McMahon, a land manager working with Rainforest Rescue. His handshake is firm and, as he’s leaving the shade of the old-growth forest, he walks into a lot which used to be a sugarcane field, and now covers plants of various sizes. The pressing heat in the open shows no mercy, and Justin – although he’s used to Queensland’s climate – is drenched in sweat. Even so, he still smiles and carries on. Justin is “building species”; it’s the process, he says, of planting various types of vegetation species next to each other so they can thrive. He’s planting some 200 tree species, some of which will grow faster than others and thereby offer shade and nutrients for the ones that follow. Next to the field grows a forest corridor—where trees were planted a few years ago, with some now reaching more than ten metres in height. The trees now attract animals like flying foxes and endangered cassowaries, which then will disperse fruits and seeds naturally over even greater areas. It’s a success story in the making.

Even so, a new threat has arrived in the Daintree during the pandemic. People from big cities like Sydney and Melbourne are showing interest in tree-changing, and are buying up land in the area. With the newcomers, a huge new challenge arrives. “The biggest threats to the lowland Daintree rainforest continue to be inappropriate development and climate change, with historic fragmentation exacerbating the potential for decline,” says Dr Robert Kooyman, a Research Fellow at Macquarie University’s Department of Biological Sciences. Kooyman, (who Wild interviewed in Issue #175) is a rainforest ecologist who provides scientific advice to protect intact rainforest areas that are currently outside conservation reserve systems, and who works to restore areas previously cleared of rainforest or degraded by different land uses.

So why is the Daintree important? Well, for starters, says Kooyman, the Daintree protects the largest remnant of lowland tropical rainforest in Australia. The lowland rainforest also adjoins and connects to upland rainforests rich in Gondwanan plant and animal lineages and evolutionary history. “It represents a direct connection to that deep time history,” says Kooyman.

He also says it’s important to reconnect small and large forest areas in the Daintree. “It facilitate[s] the movement of plants and animals, and protect[s] the functional integrity of the forests and enhance[s] their capacity to be resilient in the face of climate and other changes.”

Looking ahead to further expand Australia’s rainforests requires, says Kooyman, a combined “toolkit”. It’s necessary, he says, to nurture and enhance natural regeneration processes, and to assist those natural processes with weed control, but also to engage in the “scientifically informed restoration planting of trees.”

And that doesn’t mean simply finding the fastest growing species and planting lots of it. “We have to mimic nature,” says Marine Deliens, manager at Rainforest Rescue’s nursery in the Daintree. Part of that process of mimicking nature, she explains, is ensuring there is genetic variation in the plants; it’s crucial, and gives them better chances of survival. It’s also important to divide certain species into certain areas, and to help plant species spread naturally via animals such as birds or wild pigs. 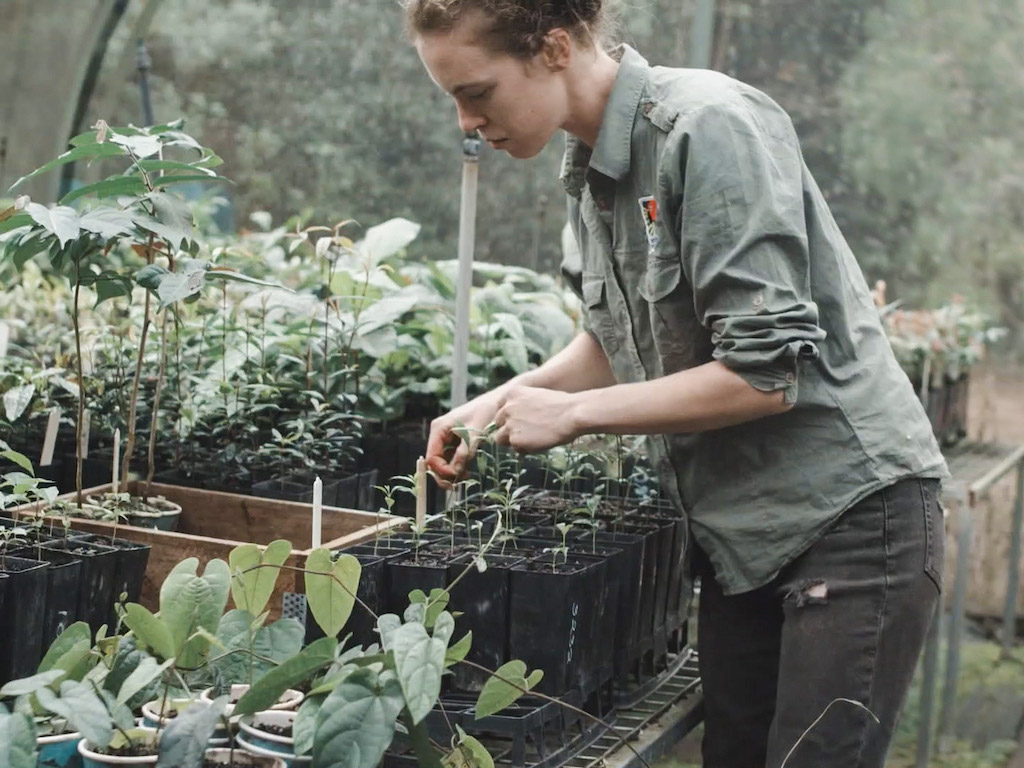 Marine Deliens at work in the shade house.
Credit Liana Cornell, from the documentary series Refugia

The nursery consists of various sections. The initial stage is a ‘shade house’ where seedlings and small plants are protected from rain and harsh sunlight. Once they’ve grown sufficiently, they’re moved out into the open, unforgiving climate of northern Queensland. “We want sturdy plants,” Marine says, “so we try them out in the sun to see if they survive.”

Currently, the nursery produces 12,000 plants annually. But this number is set to increase dramatically later this year, when the nursery is to be transferred to an abandoned airport, long overgrown by weeds. The new nursery is planned to hold up to 150,000 plants.

Not Everything is New

Nurturing this forest and growing plants, however, is far from a new activity in the Daintree. The Traditional Owners of the Daintree, the Eastern Kuku Yalanji people, have long used, and are still using, their knowledge in replanting the rainforest.

“We are natural gardeners who grow seeds, among other things,” says John Dockrill. John grew up in Wujal Wujal, a small Aboriginal community in the Daintree, and compares his people’s connection to the rainforest with that of the Amazon and its Indigenous peoples.

The forest, he says, “is our life nerve. We must have [it] in order to exist.”

In September 2021, formal ownership of four national parks in northeast Queensland – including the Daintree – was returned to the Eastern Kuku Yalanji people. (Ed: It’s about time!) They will co-manage the parks, which have a combined area of 160,213ha, in partnership with the Queensland Government. This management role is important; native title had been recognised over the area, but locals wanted more than recognition: They wanted a say in management; this new partnership recognises the people’s land rights and their ability to manage their own Country.

Eastern Kuku Yalanji culture is one of the world’s oldest living cultures, and part of managing this area will involve Elders and rangers sharing their knowledge with the younger generation. They’ll do so in diverse fields, such as controlled fires, regeneration of plants, and understanding wildlife such as crocodiles. But the knowledge of the Eastern Kuku Yalanji people is planned to be spread further, says John Dockrill. As members of the Kuku Yalanji people become leaders in the tourism industry, he says they’ll share their knowledge with visitors. The result will be a network of people helping to protect the diverse ecosystems of the Daintree – its rainforests, woodlands, wetlands, and mangroves – which together form one of the most important natural places on earth.

The Daintree is famously the only location where two UNESCO World Heritage-listed areas meet. The rainforests stretch out to the Coral Sea, home to the Great Barrier Reef and its WHA-listed reserve. Apart from being an important tool as a carbon sink in the fight against climate change, the Daintree is also preventing leakage of agricultural nutrients from reaching the reef—which is already affected by recurring bleaching events. 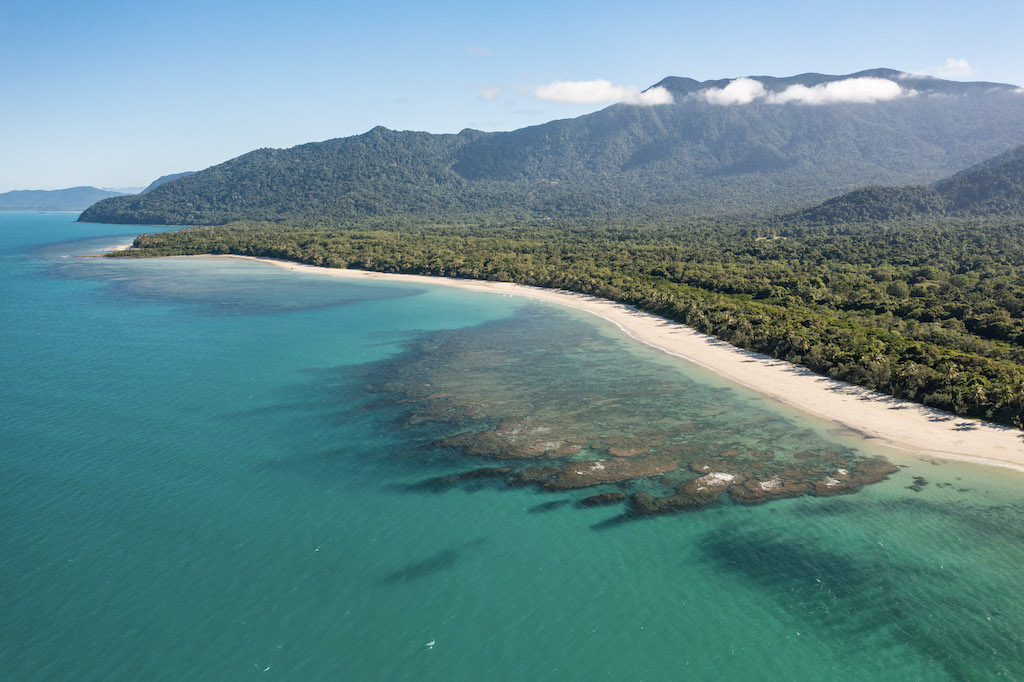 Rainforest and reef in the Daintree.
Credit Martin Stringer

“The forest acts as a barrier before the reef,” says Steve Edmondson. His family business in Port Douglas – Sailaway Reef and Island Tours, which brings tourists on reef trips to view sunsets with the Daintree as a backdrop – is involved in the planting of corals, creating what will be new ‘coral gardens’. “We already see how the new corals create ecosystems with many different fish species,” Steve says. He also says the reef is resilient, and it’s on its way back despite the bleaching events. “It just needs a little help on the way, just like the rainforest.”

And a little help is exactly what organisations such as Rainforest Rescue are bringing in. Many locals are not only interested in replanting rainforest, but also want to see the restoration of wetlands. And Justin McMahon is positive about the future in the Daintree. “It’s all about finding a balance,” he says. If only given a chance, nature will bounce straight back.

[Link to the PDF article, which appeared in Wild Magazine 2022 Winter Edition #184.] 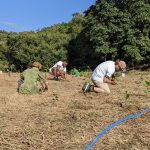