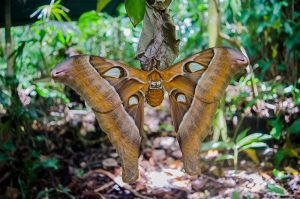 You may have heard of Hercules… but what about Hercules Moths (Coscinocera hercules)?
Despite being the largest moth in the world… Hercules Moths don’t eat! Why??? Because they don’t have mouths! As adult moths, they survive on food stores that they ate prior to metamorphosis.

Hercules Moths spend most of their lives (approx. 3 mths) as caterpillars.
During this time, they live on food plants such as the bleeding heart (Homalanthus novoguineensis), red bean trees (Dysoxylum mollissimum subsp. molle) and cheese trees (Glochidion ferdinandi). As caterpillars, they can grow up to 12cm in length, are pale green in colour and have spots and striking yellow spikes.

Once emerged from their cocoon, these beautiful moths only live for 10 to 14 days, and their main goal is to find a mate & reproduce. As adults both males and females are brown in colour and their wings are spectacular – they have transparent triangular ‘windows’ and white triangular edges. The female is the larger of the species and they do not have long tapered tails like their male counterparts. 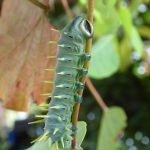 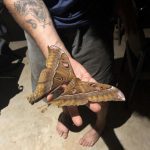 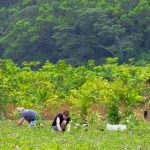 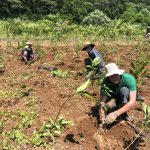