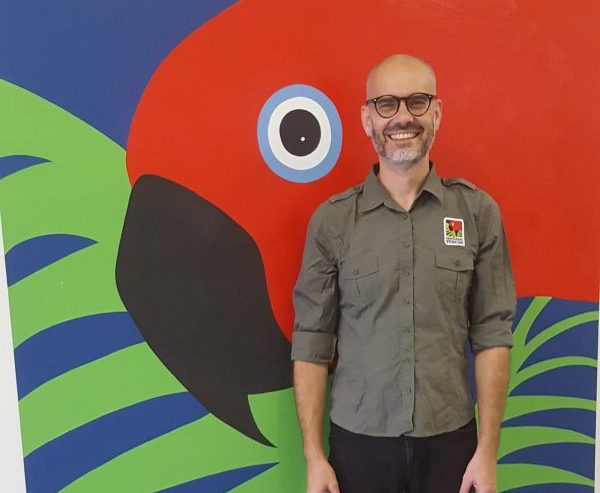 Please welcome César Garcia to the Rainforest Rescue team. He’s here to help us grow and tend our garden of support.

What brought you to Rainforest Rescue and how do you feel about the organisation?

It’s important for me to be engaged in work that is both ethical and beneficial. As a practising Buddhist, the concept of ethics is the driving force behind my every thought, word and deed, which not only provide a framework for one’s conduct in life but also brings about the kind of nourishment that is derived from engaging in wholesome activity. It’s difficult to say for sure how much we can truly benefit others and the world but knowing that I’m engaged in something self-beneficial ensures that whatever I do can only be of benefit to others as well.

I was attracted to Rainforest Rescue because this concept of ethical behaviour is something that is embodied and enacted in the organisation, producing tangible results — the drive to rescue, restore and protect. Rainforest Rescue engages in work that is so important at a local level, drawing in help from local people and getting the community engaged both financially and through physical work, without never losing sight of the global picture.

What’s your favourite aspect of working here as our Engagement Coordinator?

It’s incredibly fulfilling to work amongst individuals that care so passionately for the environment and the beings residing therein. I’m a firm believer that in order to do good work, there must be a great amount of respect amongst co-workers and a genuine sense of care and desire to nurture each other. From the moment I met the team at Rainforest Rescue I sensed that this was very much the case, it felt more like a family with shared goals as opposed to a group of people working in an office for a pay-check at the end of the month.

Being the Engagement Coordinator is a challenging role and I always welcome the opportunity to live on the edge of my capabilities — this is where I learn the most about myself and the domain where real magic can happen. The area of engagement itself brings me directly in contact with the community, and with those individuals that contribute directly to making a difference in the world. My role helps provide the mechanisms for our community of supporters to engage in meaningful, wholesome activity. On one level it’s about inviting financial support, but on a much more profound level, it’s about giving people that opportunity to engage with and be involved in making a difference in the world. It’s about reframing our attitudes to money and developing a more wholesome view in which to direct our resources — not only does ‘giving’ bring us personal long-term benefit, but it also manifests benefit in our world here and now.

What are your plans for the role?

I would love to see more groups and organisations involved with Rainforest Rescue. I’m also interested in the relationship between rainforests and other environmental sub-types, and generating more awareness around this; people enjoy hearing about the science of interdependence and the powerful role we play as individuals in affecting that.

In addition to the rainforests of Far North Queensland, I have a particular fondness for the tropical peat forests of South East Asia and would like to see more international partnerships developed, to see ourselves actively getting involved and supporting the other parts of the world that need help … we’re all connected and very much need each other.

What has been your best day so far and why?

I recently needed to investigate an organisation that provided significant support for our work through a bequest. I enjoyed very much the process of delving into records and problem solving, and what I uncovered was extraordinary (in my opinion). The company was an organisation that took care of the estate of deceased persons, and an individual who had donated for over 10 years left a legacy gift for Rainforest Rescue!

It really struck me how the work that Rainforest Rescue is so close to the heart of many people. To have felt that strongly about a cause to then leave them in your will was incredibly touching … it really put into perspective the work that we do here and to never take for granted the impact we have on people’s lives. The fact that this person felt such confidence in the work of Rainforest Rescue was incredibly inspiring and empowering.

What brought you to Australia and where did you come from?

I was previously working as the Teaching Services Director for a Buddhist charity in the UK, whose aim it was to offer the Buddha’s teachings in a way that is based on an authentic tradition, yet also relevant and beneficial for people in the modern world. This was achieved through the organisation of courses and seminars in meditation and compassion, as well as offering a complete path of study and practice for every stage of the Buddha’s teachings. It was during one of our international retreats in the South of France where I met my Australian wife to be.

Being of Spanish nationality and growing up in the UK, I’m no stranger to travel, and so it felt absolutely appropriate to get married and move to Australia to raise a family. We have 3.5-year-old boy and girl twins. For the first few years of our children’s lives, I was their primary carer and so had the greatest privilege to devote my time to rearing them.

An absolute passion of mine are the species Parosphromenus and the conservation of their natural habitats — the acidic swamps of the tropical peat forests of South East Asia. The likes of which are being destroyed at a catastrophic rate by the palm oil industry. Otherwise known as Licorice Gouramie, these fish are specially adapted to extremely nutrient-poor, sterile blackwater streams … a biotope that is hostile to life, as far as the majority of ‘normal’ fishes are concerned. It isn’t at all easy for the normal fish organism to cope with pH values between 3 to 4, Parosphromenus on the other hand, have a remarkable ability to occupy marginal, stagnant waters and to tolerate anoxia.

Through this I have also developed, as some might say, a worrying obsession with peat swamps, their ecology and the role they play in the natural world. Some of the peat swamps in Kalimantan are said to be up to 11,000 years old, but I particularly find the swamps of Australia really interesting. Although quite rare, the best example of Australian peatland can be found in Wingecarribee, NSW … the peat here is said to have begun forming 14,700 years ago!

I am a member of the Parosphromenus Project, an international organisation, attempting to raise awareness of the Parosphromenus species and the devastating threat to their environment. Through an organisation like the Parosphromenus Project, I’m connected to the global community of Licorice Gourami enthusiasts, civil scientists and environmentalists. This can’t be considered a conservational effort, however, as ultimately it will not be possible to release the fish into the wild again, since the little that remain of their habitats will ultimately be destroyed. The Project instead emphasise the necessity of keeping these fish to breed and conserve their numbers.

What is it you find most interesting or compelling about the Daintree and our work there?

The Daintree is said to be the oldest tropical rainforests and one the most biodiverse environments on the planet. The fact that it is literally on our doorstep makes the work that we do there hugely significant as a charity, not to mention the impact its conservation has on the world. To be a part of the Daintree’s protection and restoration is humbling and exciting.

The success of Lot 46 showcases the success of reforestation, demonstrating without a doubt the incredible work of Rainforest Rescue and its committed supporters. Could there be anything more environmentally important? Who wouldn’t want to be a part of that and want to do more?